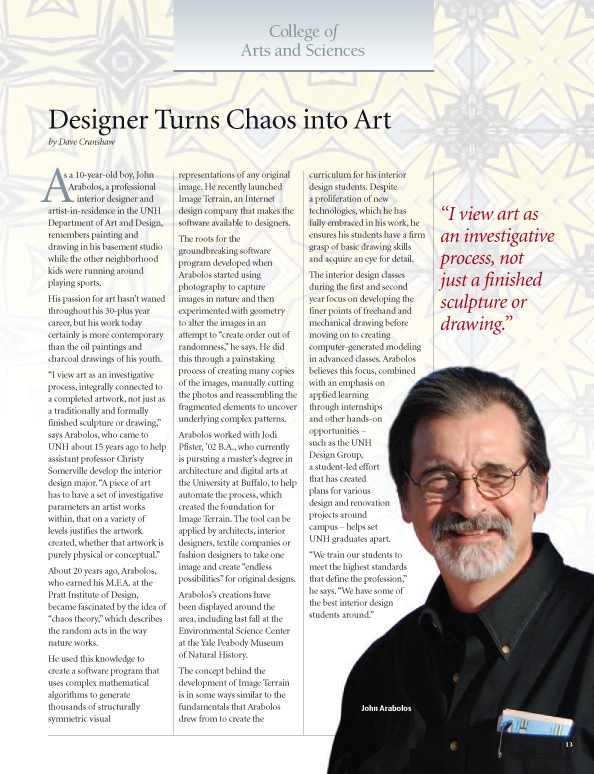 By Dave Cranshaw
WEST HAVEN - As a 10-year-old boy, John Arabolos, a professional interior designer and artist in residence in the UNH Department of Art and Design, remembers painting and drawing in his basement studio while the other neighborhood kids were running around playing sports.

His passion for art hasn’t waned throughout his 30-plus year career, but his work certainly is more contemporary than oil paintings and charcoal drawings.

"I view art as an investigative process, integrally connected to a completed artwork, not just as a traditionally and formerly finished sculpture or drawing," says Arabolos, who came to UNH about 15 years ago to help assistant professor Christy Somerville develop the interior design major. "A piece of art has to have a set of investigative parameters an artist works within, that on a variety of levels, justifies the artwork created, whether that artwork is purely physical or conceptual."

"Chaos Theory"
About 20 years ago, Arabolos, who earned his M.F.A at the Pratt Institute of Design, became fascinated by the idea of "chaos theory," which describes the random acts in the way nature works.

He used this knowledge to create a software program that uses complex mathematical algorithms to generate thousands of structurally symmetric visual representations of any original image. He recently launched Image Terrain, an internet design company that makes the software available to designers.

The roots for the groundbreaking software program developed when Arabolos, started using photography to capture images in nature and then experimented with geometry to alter the images in an attempt to "create order out of randomness," he says. He did this through a painstaking process of creating many copies of the images, manually cutting the photos and reassembling the fragmented elements to uncover underlying complex patterns.

Arabolos worked with Jodi Pfister, ’02 B.A., who currently is pursuing a master’s degree in architecture and digital arts at the University at Buffalo, to help automate the process, which created the foundation for Image Terrain. The tool can be applied by architects, interior designers, textile companies or fashion designers to take one image and create "endless possibilities" for original designs.

Arabolos’s creations have been displayed around the area, including last fall at the Environmental Science Center at the Yale Peabody Museum of Natural History.

Firm Grasp of the Basics
The concept behind the development of Image Terrain is in some ways similar to the fundamentals that Arabolos drew from to create the curriculum for his interior design students. Despite a proliferation of new technologies, which he has fully embraced in his work, he ensures his students have a firm grasp of basic drawing skills and acquire an eye for detail.

The interior design classes during the first and second year focus on developing the finer points of freehand and mechanical drawing before moving on to creating computer-generated modeling in advanced classes. Arabolos believes this focus combined with an emphasis on applied learning through internships and other hands-on opportunities - such as the UNH Design Group, a student-led effort that has created plans for various design and renovation projects around campus—helps set UNH graduates apart.

"We train our students to meet the highest standards that define the profession," he says. "We have some of the best interior design students around."